With almost ten years of pop history, the Dolly Dots are an important chapter in Dutch pop music. It's high time to give the Dolly Dots' oeuvre the release it deserves in this beautiful collector's box from music label CD-licious.

‘The Complete Album Collection… and a little bit more!’ brings all ten albums together, plus many rare bonus tracks, of which many have not been available for over 35 years. Most albums have their first official release in this boxset.

It contains 141 tracks on ten CDs, of which 58 were previously unavailable officially on CD.

In addition to the albums, the 10-CD boxset also contains 12” versions, B-sides, single versions and foreign releases. The Dolly Dots recorded a French-language single for the French market. Different versions of 'P.S.' appeared in America. Also in Japan and on various singles, versions were heard that were different from those on the albums. In the archives one recording has also been found especially for this CD box, that has never been released before: the classic 'Sloop John B.'.

In the booklet, the Dolly Dots tell their memories and anecdotes in detail, supplemented with beautiful photo material from the archive of star photographer Govert de Roos. The box appears in a numbered limited edition.

The Dolly Dots scored 25 hit singles between 1979 and 1987 and released 9 albums. ​In addition to the musical successes at home and abroad, the ladies were also trendsetters in clothing,

make-up and hair. A TV series, a series of dolls and a Hollywood film followed. The Dolly Dots set the tone for an entire generation. (Re)discover why the Dolly Dots belong to the absolute top in Dutch pop music.

For the real fans there is this Totally Hooked Fan Package: the 10-CD box set 'The Complete Album Collection... and a little bit more!' PLUS an original art print of the Dolly Dots, available exclusively through this website. This high-quality art print on Hahnemühle Baryta paper is numbered in a series of only 30. It measures 20 x 20 cm, supplied in a 30 x 30 mat signed by photographer Govert de Roos.

NB: The 'Love Me Just A Little Bit More' art print is sold out. Fortunately Govert de Roos made a second artprint available, exclusively with the Totally Hooked Fan Package.

(NB Not signed by the Dolly Dots)

* First official release on CD | ** Not released before 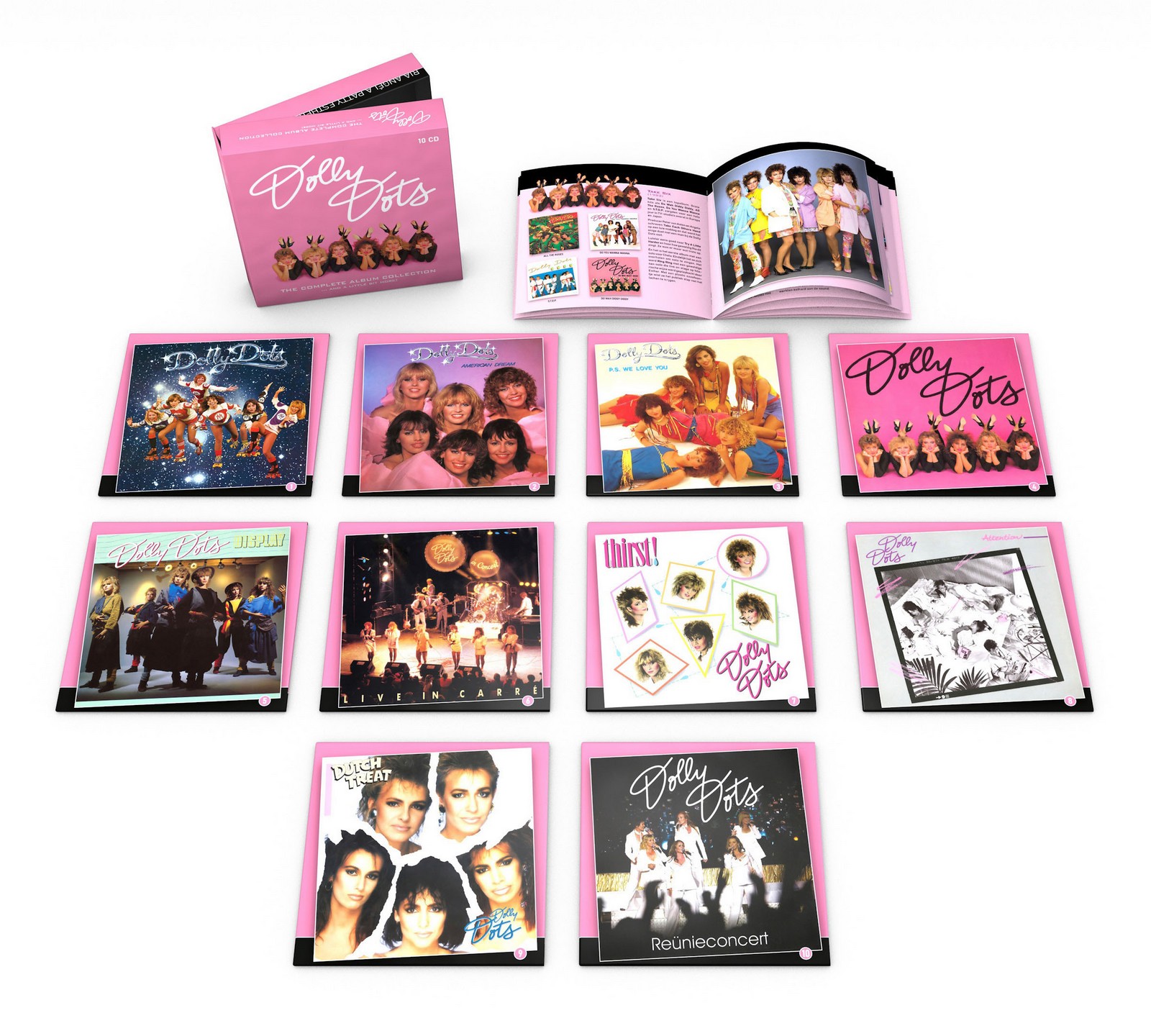 The 10-CD box set 'The Complete Album Collection... and a little bit more!' was made in an edition of 1500 and is currently sold out.